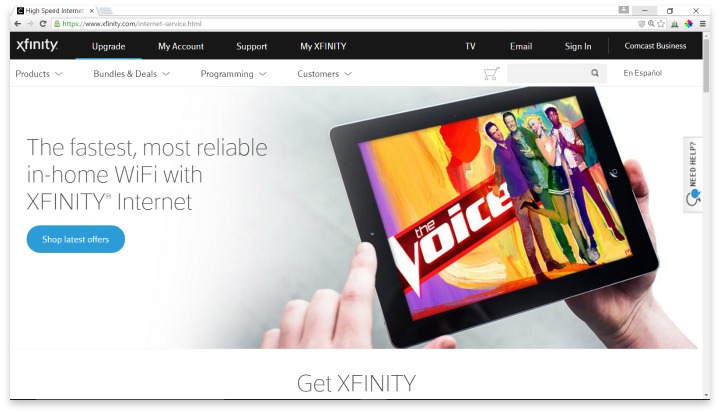 Xfinity is a division of Comcast Cable Communications, and provides Internet to over 40% of the entire Internet customer base in the United States. This makes Comcast the largest provider of cable Internet in the country, serving over twenty million customers. They’ve been providing Internet service since the mid 1990s, and began using the Xfinity name in 2013.

Xfinity claims to be one of the fastest Internet providers around, with plans that report up to 105 Mbps. At this speed, even the most dedicated gamer could experience a media-rich experience with no lag, ever. However, these speeds have not been verified by reputable third parties, and they vary greatly depending on your location. Xfinity also offers high upload speeds, which isn’t a common feature among Internet providers. Their best package boasts 20 Mbps in upload, meaning that content providers can upload video, audio, and images almost instantly.

Xfinity does provide bundles, where users can get Internet and TV, or Internet, TV, and phone services, on one bill. These bundles provide a small discount on Internet services, but the real bonus there is in convenience. Xfinity’s packages start around $30 per month, which is average for the industry. Their equipment leasing is slightly more expensive than other Internet providers.

In the past, Comcast’s data caps have been a very controversial topic, with their 250 GB per month cap creating a lot of financial stress for customers. Anyone who went over the cap more than once was terminated as a client. But in April 2016, Comcast announced that the new data cap is now 1 TB per month, which they claim that 99% of users never even come close to using. Users can also pay $50 per month for unlimited data.

As far as extra features go, Xfinity offers a ton of security and control features, but one of the biggest draws to Xfinity is the lack of required contract. Users can cancel at any time. This is huge in this industry, offered by almost no other competitor, and is one of the main reasons why Xfinity is such a popular choice.

But as with other services, Comcast Xfinity’s weakness is in its coverage. Most major metropolitan areas in the country are covered, but the Midwest is largely ignored. And if you aren’t located near a major city, those promised speeds of up 105 Mbps can’t be reached.

Customer service for Internet providers is difficult to rate, because almost no major ISP has a great reputation in this area. Xfinity provides several contact options outside the usual methods, such as social media profiles, a company forum, and 24/7 live chat help. One thing to note that makes many customers uncomfortable with Comcast is that their company focus is often described as “scattered” – they are constantly evolving into new areas of business, never dedicating themselves to becoming experts in one thing. This may lead some users to feel as though they can’t be connected to true experts in Internet service.

If you live in an area where Xfinity is offered at all, but especially in an area where you can access the higher speeds, there is absolutely no other company that can beat Xfinity’s offers. The lack of contract makes them relatively risk-free, and even if the customer service isn’t as great as it could be, your excellent Internet features should more than make up for any occasional aggravation.

Have you had an experience with this company? Please share your Xfinity Internet reviews below.

Dog Training 3706
Lorena Cherkaoui After thoroughly researching retractable awnings online we found Retractableaw... RetractableAwnings.com Reviews
Jack T I have a trim beard and so I use the GFCI outlet in the bathroom almost every... The Home Service Club Reviews
Lan Van CARFAX reported that there was structural damage done to my vehicle from an ac... Carfax Reviews
ENRICO Horrible and unethical business practices. No wonder BBB revoked your accredit... 1800wheelchair.com Reviews
Dianne Signing up was very easy after I did all my homework on the policy I bought! ... AA Auto Protection Reviews

- This website is for informational purposes only and not intended to replace legal, medical or expert advice.

- The Comparison Shopping Network receives compensation through advertising, membership and affiliate relationships with some companies featured on our sites.

- If you are affiliated with a company featured on this site and wish to change, remove or otherwise dispute information about your company, please contact us.

Follow Us
ABOUT COMPARISON SHOP
Comparison shopping is the essence of the Internet. Even major search engines display thousands of results for the user to compare and choose from. The new ComparsonShop.com is designed to help consumers quickly and easily reduce the overwhelming options found online today... down to the single best choice.